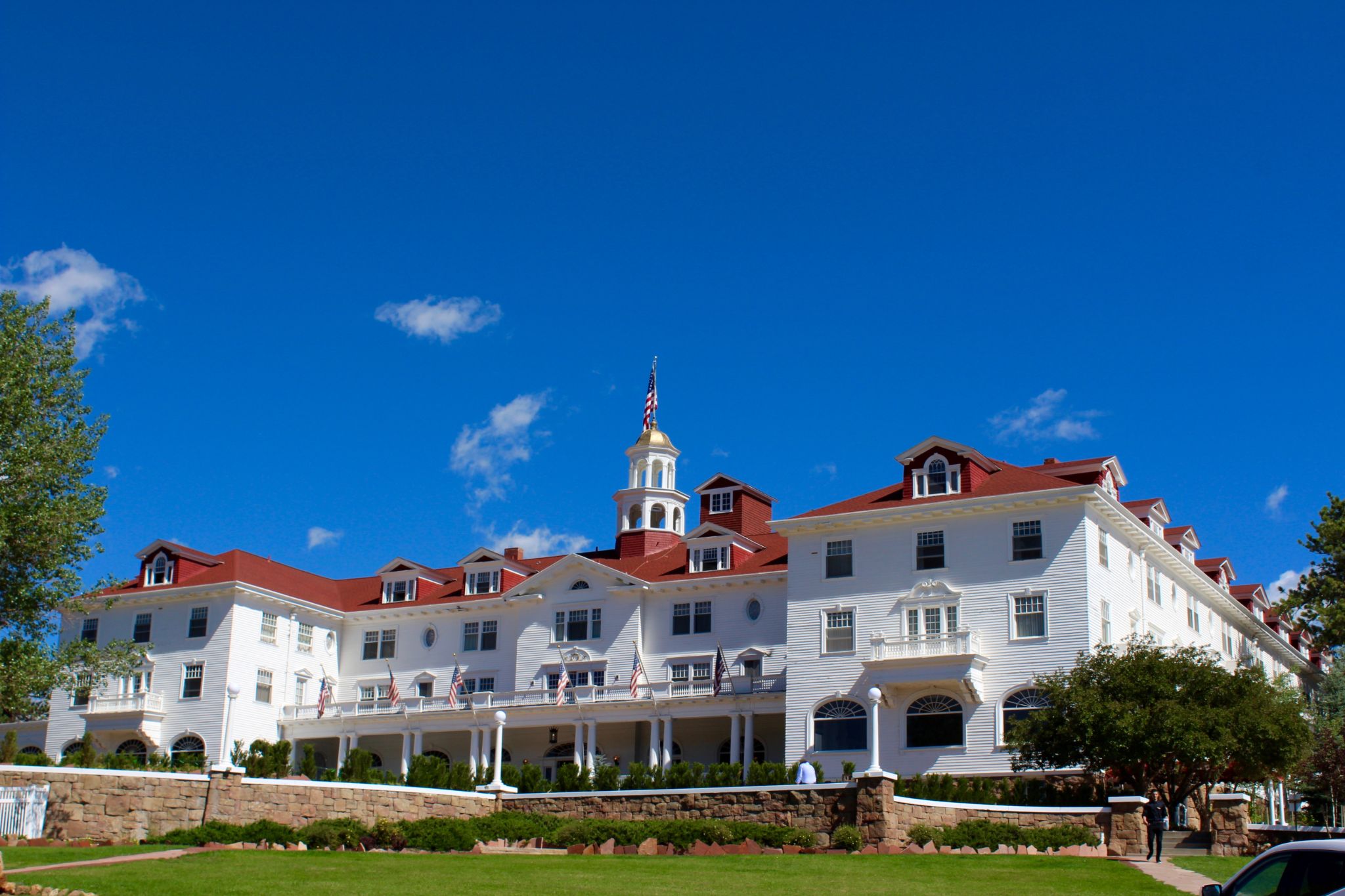 Tucked away in the rocky mountains of Colorado sits a

grand hotel. From the outside it looks like the perfect

snowy getaway, but inside it harbors a secret. This lavish

hotel has more than living guests staying within

its walls. This hotel is haunted.

Or at least so they say. Lol

The historic Stanley Hotel in Estes Park, CO opened its

doors in 1909 after being built by Freelan Oscar (F.O.) Stanley

and his wife Flora who visited the area in 1903 and

accredited it for F.O. ‘s remarkable recovery from consumption.

after year that also met the fancy East Coast standards

Flora was used to and thus The Stanley was born. To this

day the hotel remains a lavish getaway, but not all is as it

appears. This hotel is also considered to be one of the most

haunted locations in the US and, when you book your

stay, you can even select to stay in one of their “spirited rooms’” that

are said to have more paranormal activity than others in

the hotel. So of course that was one of the rooms I booked.

Pulling up to The Stanley I was geeking out HARDCORE.

I watch every year around Halloween so I was absolutely

that inspired it all. (I feel like it is important to note that The

Stanley merely served as the inspiration for the book/movie

The Shining and was not where the movie was filmed. I believe

that the hotel where the movie was shot is actually located

in Oregon and is called the Timberline Lodge.)

floor where my room was located and to what is supposedly

the most haunted floor in the hotel. Back in the day this

floor was where wealthier children and their nannies

stayed and guests have reported hearing the sounds of

children in the hallway. Ooooo spoookyyy. Lol But in all

seriousness if I heard a child laughing in the hallway outside

of my room you had better believe imma be checking

to explore the rest of the grounds. I found the room where

Stephen King stayed (room 217), a couple of their more

famously haunted rooms including room 401, and even did a

walk through the hedge maze (granted at this time the hedge

thing to do, buuuut it was still fun).

There was also this beautiful walking path and garden right outside that I explored.

After my exploration I was feeling some hunger pangs so I

went and ate dinner at their onsite restaurant, Cascades

Restaurant & Lounge. The food I had here was some of

side I highly recommend you eat here (not that there are

many other options nearby unless you are wanting to

drive all the way into Estes Park. lol).

After dinner it was showtime. Apparently it was my lucky night

because that night in The Stanley they were hosting a

show by Aiden Sinclaire, a magician that I watched

perform on America’s Got Talent.

His show was called “Illusions of the Passed” where together

we would all take part in a séance and interact with

those who had gone before us. It was so spooky

(definitely didn’t help me sleep), but entertaining and I

absolutely loved it. (I have to admit that I don’t really think we

actually contacted any spirits, but y’all this man is an extremely

talented illusionist.) He did an amazing job and I even got the

front row! I would go back to any of his shows again in a heartbeat.

After Aiden’s show it was bedtime….or I guess what would

be more accurately described as me laying in bed with all

the lights on watching TV and jumping at any and every

sound that I heard. Lol I legit did not get more than maybe

an hour of sleep that night just because I scared myself

so much! I personally didn’t experience anything paranormal

of laying in bed paralyzed like a scaredy cat. *sigh* Next time.

grounds. The tour guide told us the history of the hotel as

hotel on the map. It was super informative and again this is

something I highly recommend you do if you plan on staying here.

Our first stop on the tour was to the music room. In here you can

has it that a man decided to test his skills on the piano and, angered

by his audacity, Flora slammed the keyboard cover down on

top of his fingers. That man should have known better than

to touch a lady’s piano without permission.

Next stop was the dining room. In June 1911 chambermaid Elizabeth

Wilson went room to room with the other chambermaids

lighting backup acetylene lamps after a storm took out the

power to the hotel. Elizabeth entered room 217 candle in hand

unaware of a gas leak within the room. Upon entering an

explosion occurred and she was thrown through the floor

into the dining room below. Elizabeth survived, but suffered

two shattered ankles. F.O. Stanley paid for all her medical

expenses and made her head chambermaid and she remained

working at the Stanley until her death in the 1950s. Elizabeth

her main place of haunting occurring in room 217

(the “Stephen King room”). She has been known to complete

by the door, she has tucked in guests, and has even been known

to force unmarried couples apart who dare to share the same bed.

We continued through the rest of the hotel visiting all the

main spots both in terms of history and hauntings. One really

from the haunted room 401. If you venture over to the stairs

and look up this is what you will see…

The final stop on the tour was through the underground tunnels

tunnels come from!) As with most creepy tunnels this one

has been known to also have it’s fair share of paranormal moments.

the hotel and some believe the ghosts that haunt the tunnel

And that was my stay at the gorgeous Stanley Hotel. I really

would love to go back and stay again sometime especially for

Halloween since they host a Halloween party called The Shining

Ball every year. Have you visited The Stanley? What haunted hotels

have you stayed at? Let me know in the comments!

One thought on “Spending a Night at The Stanley Hotel”