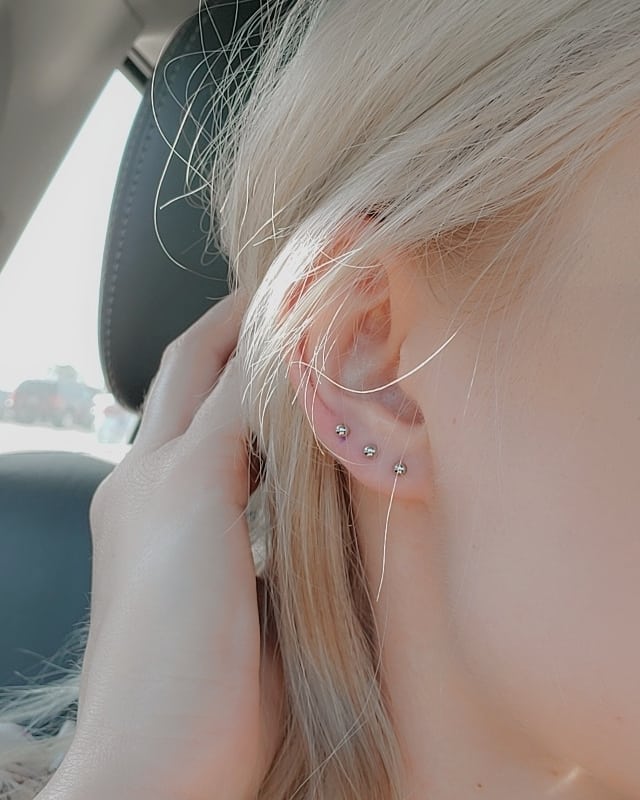 getting it done. I was scared, but also kind of excited! It was

btw. lol) I followed the after-piercing care instructions and

everything went smoothly, but once it was time to take out

the studs and replace them with actual earrings, well, that’s

where I dropped the ball. I took out the studs and my ears

never saw another pair of earrings again so of course those

holes closed up. However, now at 25, amid a potential

quarter-life crisis, I decided I wanted to have my ears pierced

again. Oh and I not only wanted one piercing in each

bargain shopper so when it came time to get my ears

pierced I wanted to find the cheapest (and safe!) option. I

decided that this meant I was going back to that awkward

chair at the front of Claire’s (seriously though who decided

to put this chair at the front of the store?!). I walked into the

busy store a nervous wreck, surrounded by little girls being

chased by their dads, avocado themed accessories, and walls

of hair scrunchies and scarves I actually considered

purchasing (I held tough though lol).

I thought I was going to be judged for sure. 25 years old

the little girls and their moms to get my ears pierced. However, not

it, I wasn’t the only adult there to get it done. It was honestly

line which gave me plenty of time to stand around rethinking

my decision and forcing myself not to walk out of the store. lol)

When it was finally my turn I hopped into the chair, told the

lady I wanted to do three piercings, and showed

She took a quick look at it, completely unfazed by my

request. and set right to work placing dots on my ear to

mark the future piercings. She let me take a good look

then, when we both agreed they looked even, I chose my

studs (I of course went with the cheapest option

they offered lol), and she brought out the gun.

I was soooo nervous because I knew it was going to hurt.

my ears pierced and this time I wasn’t getting just one, but three).

However, I was sitting in that chair at the front of the store with

them that it hurt! I had to be tough for them! Lol

She started on my left ear first.

to piercing three. I was sweating hardcore at this point, but I was

mask up to my face so you couldn’t see my full facial expression lol).

moved on to ear number two. I sat there as she again did

one, two, three piercings in my right ear one after the other

with no break. Unfortunately on piercing three there was a bit

because the stupid stud didn’t go in properly, but after that it was

all over. I had my ears pierced and by George, after all of this, I

was certainly not going to let them close up again.

walked up to the register to pay for the piercings. For three in

each ear and including the price of the studs it ended

Before leaving they gave me an after care package that

included after care instructions and a 3-week rapid healing

out exceptionally well and I was done with the after care

treatment before leaving on the my road trip).

I never had any issues with infection or swelling, which was

a great blessing, and as far as pain, well, it went away

eventually. Lol I did have some bleeding throughout the

healing process, but I think that is pretty normal and it

wasn’t an insane amount. Just something I noticed

when I cleaned my ears, but it wasn’t enough to

without a moment’s hesitation. As I said the staff was

non-judgmental, they knew what they were doing, everything

was sanitary, and it cost me waaaaaay less to get it

done at Claire’s than at a piercing/tattoo parlor.

How many piercings do you have? Would you go to Claire’s

to get your ears pierced after reading this? Let me know in the comments!